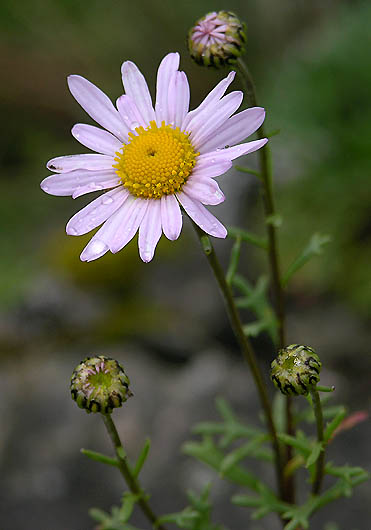 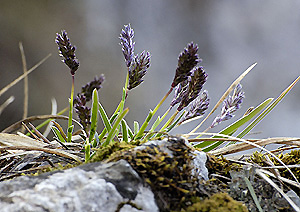 The rocky shelves of Central Pieniny are covered with an endemic Alpine Dendranthemo – Seslerietum community (in other words - this species composition occurs nowhere else in the world). Species growing here adapt to the specific climatic conditions and are characterised by having succulent leaves which store water, or leaves covered in hairs which prevent water from evaporating, and by well-developed root systems which enable the plants to 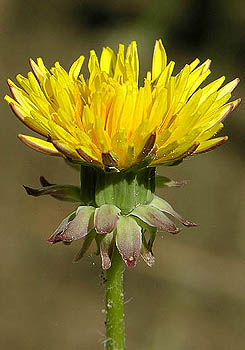 become firmly anchored  to the rocky ground. The dominant species here is Sesleria varia, which is unknown in Poland other than in the Pieniny, Tatras and Ponidzie regions.
It is worth mentioning the Tertiary relict which is also a Pieniny endemic – the Pieniny Dandelion Taraxacum pieninicum. Another curiosity of the Pieniny mountains is also a relict  species – Zawadzki Ox-eye Daisy Dendranthema zawadzkii, found only in the Pieniny Mountains and nowhere else in the entire Carpathians. 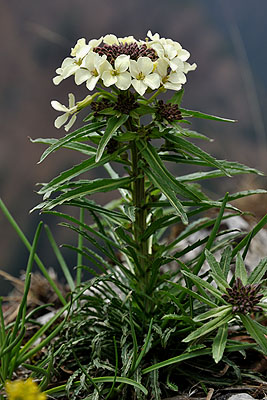 An example of Alpine flora, the Alpine Aster Aster alpinus, is found commonly on higher ground in the Tatras and the Alps. In the Pieniny this plant occurs at a height of approximately 460 ASL. Other species which are found typically in this area include: Erysimum wittmannii, Rock Rose Helianthemum alpestre subsp. rupifragum, Pink Dianthus plumarius subsp. praecox, Tragacanth Astragalus australis and stenothermic Teucrium montanum, Bupleurum falcatum, Stonecrop Sedum acre and Golden Allysum Alyssum saxatile whose notable yellow flowers adorn the Dunajec gorge cliffs in May.
Rock grasslands are truly naturally-developed communities, and existed as long ago as the Holocene and probably occurred in the Pleistocene (about 12,000 years ago). Because of the 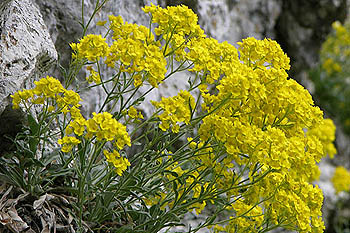 inaccessibility of  cliffs, this community has survived practically unchanged until the present time.

Rocky shelves and cliffs of Pieniny Czorsztyńskie are covered by thermophilous rock grassland Festucetum pallentis community. This community type is a semi-natural one which has resulted from deforestation of the rocks. The dominant species found here is the Fescue Festuca pallens accompanied by several thermophilous plants. 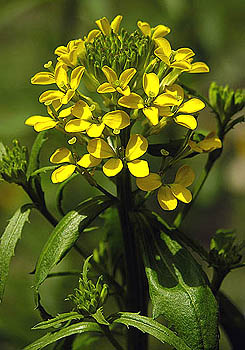 The Pieniny Treacle-mustard Erysimum pieninicum is a very interesting endemic species which occurs only on the Zamkowa hill in Czorsztyn village.

The south-facing, warm and dry slopes and the edges of scree tongues are occupied by Origano-Brachypodietum community, which in the Central Pieniny is a genuinely natural one. Some fragments of this association can be found as semi-natural ones, caused by cutting down the beech forests. Within the rest of the Pieniny rocky region, this community type is secondary, having developed on eroded rocks and cliffs and deforested slopes. The unique floral species composition is outstanding: Crown Vetch Coronilla varia, Wild Basil Clinopodium vulgare, Common St John’s Wort Hypericum perforatum, Marjoram Origanum vulgare, Leserpitium latifolium, Downy Woundwort Stachys germanica, Scabious Gypsy Rose Scabiosa orchroleuca can all be spotted here.
In the Central Pieniny, Alpine plants which have spread from the neighbouring thermophilous rock grasslands are found coexisting with the species mentioned above.
The Origano-Brachypodietum community occurs as a succession stage between Festucetum pallentis and mature forest communities. At an early stage, a lack of scrub can be observed, but later on - when the community is at an advanced development stage - bushes are dominant. The scrub flora includes: Dogwood Cornus sanguinea, Blackthorn Prunus spinosa, Common Barberry Berberis vulgaris and Roses – Rosa glauca, R. tomentosa.