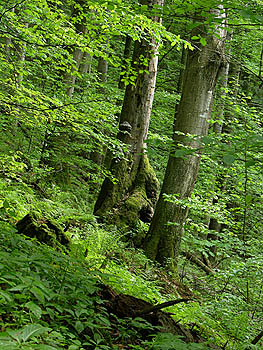 The different forest habitats which do not create a homogeneous system (despite the fact that they all occur in one vegetation zone – lower montane forest), are the result of varied and diverse land forms. In Pieniny, almost no upland forests exist. One of the most striking features of the Pieniny forest cover is its diversity, which depends on the slopes' exposures. 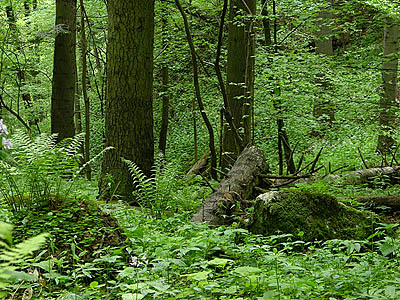 Deeper shaded gorges and gullies of Central Pieniny, with underlying calcareous rock debris, are suitable habitats for the rare forest community – Phyllitido-Aceretum. In Poland, this community is found only in Pieniny, the Sudety Mountains (Kaczawskie Mountains), Krakowsko-Częstochowska Jura and Beskid Niski. The dominant species here is Sycamore Acer pseudoplatanus mixed with Norway Maple Acer platanoides, European Ash Fraxinus excelsior, Wych Elm Ulmus glabra, Beech Fagus sylvatica and Fir Abies alba. This type of forest covers one of the most fertile forest habitats and is adapted to the subhumid humus soils that have accumulated within rock debris. The fertile humus layer can  be  up  to one metre deep here and provides excellent growing conditions for luxuriant undergrowth, with Perennial Honesty Lunaria rediviva the dominant species – and other species like Hartstongue Phyllitis scolopendrium and Greater Celandine Chelidonium majus.

The majority of Pieniny coniferous forest communities have developed from managed afforestation following the felling of natural Beech and Fir-Beech stands. Only a patch of the Spruce stand occurring in Małe Pieniny (at the bottom of Wysoka summit) can be classified as untouched, upper montane coniferous forest. This community type grows on hard-weathered calcareous substratum, characterized by acid soil. Spruce trees dominate here. In the undergrowth, species like Bilberries Vaccinium myrtillus, Club Mosses Lycopodiaceae spp. and Wintergreen Pyrola spp. make their appearance. 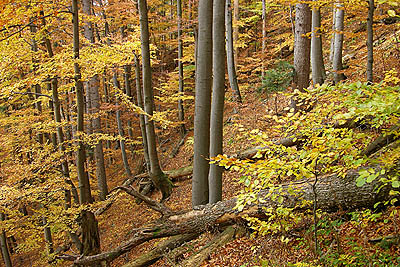 Steep, south-facing slopes are overgrown by xerothermic Fir and Beech stands (Carici-Fagetum cephalantheretosum and Carici-Fagetum abietetosum), in which the relative percentage of Fir and Beech trees depends on the location. The dominant species here are mixed with European Hornbeam Carpinus betulus, Sycamore Acer pseudoplatanus, Broad-leaved and Small-leaved Limes Tilia platyphyllos and T. cordata, European Ash Fraxinus excelsior and Wych Elm Ulmus glabra. Many rare and protected species which are found in the undergrowth, occur throughout the Southern Carpathians but exist in Poland only in the Pieniny mountains where they are at their northernmost European extreme: Sedge Carex alba, Poa stiriaca, rare orchids – Broad Helleborine Cephalanthera damasonium, Narrow Helleborine C. longifolia, Small-leaved Helleborine Epipactis 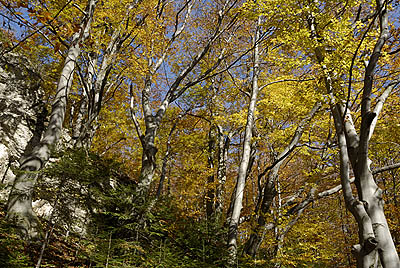 In the Dunajec river valley, up to 480 metres high, small patches of Tilio-Carpinetum forest, which requires dry-ground, can be found. These differ from surrounding Fir and Beech forests as they contain abundant and fast-regenerating European Hornbeam Carpinus betulus and Small-leaved Lime Tilia cordata. The most notable species of the undergrowth here are Greater Stitchwort Stellaria holostea, Hairy Sedge Carex hirta, Schultes’ Bedstraw Galium schultesii and Mountain Anemone Hepatica nobilis.

The tops of south-facing slopes and cliffs of Central Pieniny are overgrown with relicts from the early postglacial epoch – small Pine woods (Pinus sylvestris-Calamagrostis varia). The dominant species found here is Scots Pine Pinus sylvestris, rarely mixed with Fir, Beech and Spruce. Pine trees that have adapted to the conditions of bare rocks are of a specific shape with a stunted trunk, low and bent limbs and an umbrella-like crown. Trees that grow in the forest are of a more usual 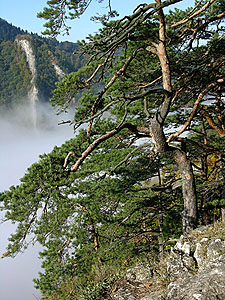 The alluvial areas of mountain rivers (especially the Rivers Dunajec and Krośnica) are occupied by the Alnetum incanae community. The occurrence of this biocenosis depends on periodic flooding of the river valleys. The flood water leaves a deposit of the minerals and nutrients on the ground, and as a result of this process the soil becomes more fertile. At the same time, species which cannot tolerate floods (and consequential lack of oxygen) or being covered by a deposit of clay, are eliminated. A specific plant association which is favoured by the changes in water-table and periodic flooding, can be found in this situation. The Alnetum incanae community is one of the most fertile forest habitats, with the dominant species of Grey Alder Alnus incana, often mixed with: Hoary Willow Salix eleagnos, Crack Willow S. fragilis, European Ash Fraxinus excelsior and Bird Cherry Prunus padus. A protected species – the Ostrich Fern Matteucia struthiopteris – also makes a very rare appearance.