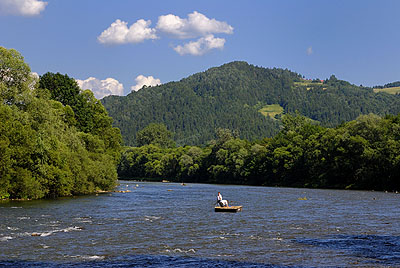 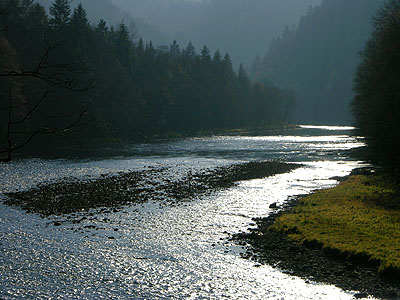 The water level is influenced by great periodic fluctuations. Water temperature is rather low and varies from 6.5oC to 14oC (in the summer time). All Dunajec tributaries (except for Białka) contain high concentrations of nitrates and phosphates periodically. The water of the Dunajec is “hard” due to dominant Ca+2, Mg+2 cations and CO3-2, SO4-2 anions.

Between 65 and 73 km from its source, the Dunajec washes the Pieniny Spiskie region and then from 73-75 km flows into the Czorsztyn reservoir. Further on, between 87 and 95 km from its source, the river flows through the beautiful Pieniny Gorge following a winding course. This 8km section covers a straight line distance of just 2.8 km! The average gradient through the gorge is 20m; the river level drops by 45m between Katy (the rafting marina – 466 ASL) and Kroscienko (421 ASL).

In the Pieniny area, the Dunajec river provides habitat for 17 species of fish. The most common ones are (Chondrostoma nasus), Common Barbel (Barbus barbus), Chub (Leuciscus cephalus) and Grayling (Thymallus thymallus). Unfortunately, nowadays, the Dunajec river is not good for salmonids. Species like River Trout (Salmo trutta morpha fario), Danube Salmon (Hucho hucho) or (Cottus poecilopus) and Bull-head (also known as Miller’s-Thumb) (Cottus gobio) are very rare, and Salmon (Salmo salar) is not found at all. It is interesting to note that species which are characteristic for lowland rivers are becoming more common. 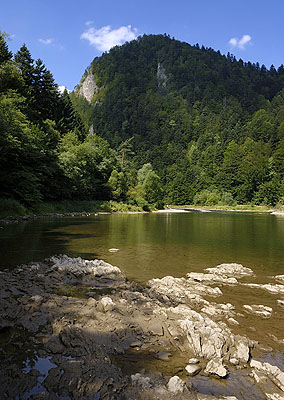 factors affect the capability for self-purification of the river. The average flow and residual high concentrations of pathogenic bacteria (despite the construction of a sewage treatment plant) have resulted in the elimination of the montane species which once lived in the Dunajec.

The Dunajec river provides suitable habitat for wetland birds, which may have benefited from the construction of the Czorsztyn reservoir. Some species can be seen more commonly since its creation including Herring Gull (Larus argentatus), Great Crested Grebe (Podiceps cristatus), Barnacle Goose (Branta leucopsis), Common Heron (Ardea cinerea), Common Tern (Sterna hirundo) (which nests on the specially built small island),  Bank Swallow (Riparia riparia) (that nest in the natural recess at the top of the Czorsztyn dam) and others such as Dipper (Cinclus cinclus), Mallard (Anas platyrhynchos), Black Stork (Ciconia nigra) and Grey Wagtail (Motacilla cinerea).