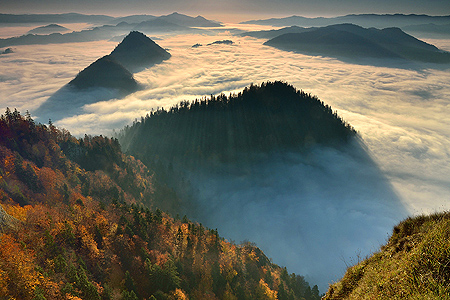 In terms of climatic conditions, the Pieniny mountains differ from neighbouring ranges and are characterized by mild climate. The distinct differences in microclimate between particular areas are related to variations in Pieniny relief. These climatic conditions also influence the biodiversity of flora and fauna in the region. The north-facing slopes and valley bottoms are markedly colder and more humid than the warm and arid microclimate of south-facing hillsides.

Cloudiness in Pieniny is low and the total annual number of cloudy days varies from 135 to 140. Low-level cloudiness is characteristic for September (8-10 days) and heavy overcast conditions are most often found in the period from November to March (11-16 days in a 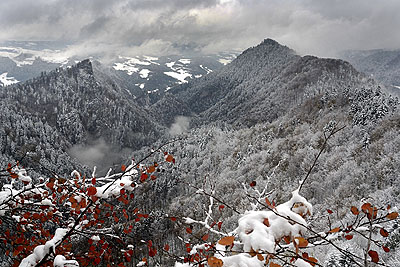 month). The number of cloudless days during the year varies from 42 to 44, with the monthly minimum in November (1-3 days) and maximum in September (2-6 days).
Insolation is strong, especially on the southern slopes. The average annual temperature varies from  6.3oC (alt. 420 m) to 4oC at Wysoka summit. The warmest months are June and July with average temperatures 13.7oC – 16.4oC. The absolute maximum is recorded from June to August, when the highest air temperature in concave relief forms varies from 32.8oC to 34.7oC. The coldest months are January and February (-5.2oC to -6.7oC). The absolute minimum is recorded in the period of December-February and varies from -30.2oC to -36.3oC.
The dominant winds are western and north-western ones and the average annual wind speed varies from 1.6 –2.1 m/s in lowlands to 2.5 m/s in highlands. The lowest speeds are usually recorded from May to September, the highest from October to April. 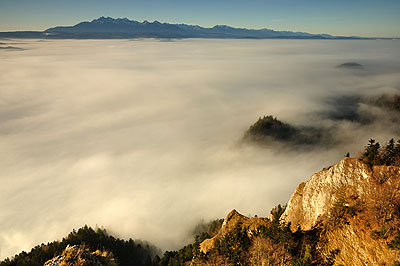 The Pieniny mountains are located in the “rain shadow” of Tatry, and are characterized by a relatively low average amount of rainfall. The precipitation depends on the elevation and it varies from 690 - 850 mm in the Dunajec valley to 1095 mm at the Wysoka peak. The winter minimum for a month’s precipitation is usually recorded in January or February (28 – 58 mm) and the summer maximum in June or July (110 - 199 mm.
During the growing season the greatest amount of rainfall occurs on northern slopes, but in wintertime abundant rainfall occurs on southern exposures. Total precipitation during the growing season varies from 440 - 750 mm. Torrential rainfalls are very frequent and happen usually in the period of May-August, with daily precipitation 30-123 mm not unusual. Precipitation greater than 10 mm in a single day occurs mainly in these summer months and the average number of days (during the summer season) with such heavy rainfall varies from 19 in the valleys, to 30 around the mountain tops. 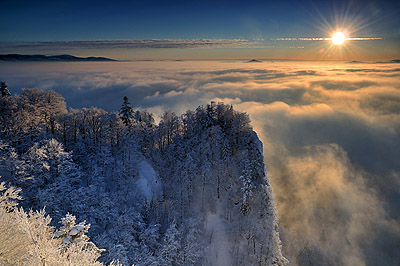 Snowfalls occur earliest in Małe Pieniny from 9th September onwards, and latest in the Dunajec valley from the 22nd of November. Snow cover disappears completely around 11th of March at the bottoms of the valleys, and around 28th of March at the tops of the hills (in extreme years these dates are March 4th – June 4th).
The number of days when snow blankets the landscape varies from 98 - 140 (around the mountain tops) and the average snow depth varies from 8.9 – 11.7 cm in the rivers’ valleys to 17.4 cm at Wysoka mountain. Maximum snow depth may be as much as 1 m.