Home HISTORY Castles in the PNP

Castles in the PNP 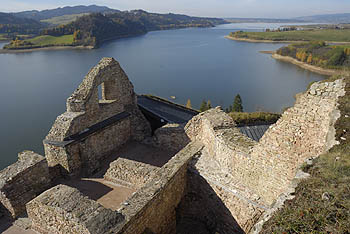 CZORSZTYN CASTLE
Ruins of this royal castle are situated on top of a steep hill, on the left bank of the Dunajec river. This castle played an important role as a stronghold on the trade route from Krakow to Hungary. The origins of the castle are not entirely clear. According to recent theory, Czorsztyn’s first name was “Wronin”. It was founded as a small wooden fortification probably by Princess Kinga in the last quarter of XIIIth century. Since 1257 she had overseen the development of an intensive settlement in the borderland between Poland and Hungary. Princess Kinga also ruled over the Sącz district. By 1348 the castle was already known as Czorsztyn. During the rebirth of the Polish kingdom, as King 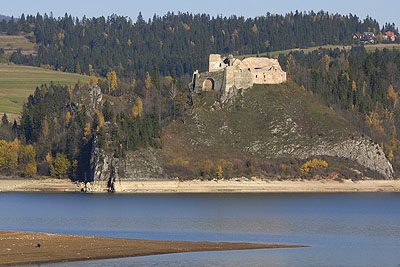 Kazimierz the Great’s property, the castle acted as a border stronghold, customs house and administration centre simultaneously. At that time, the castle was constructed entirely from stone.
We don’t know much about the castle’s earliest stone structure – recently discovered to be a big cylindrical-shaped tower dating from the turn of XIII and XIVth centuries. The mystery of its later destruction has never been solved.
Since the XVth century, Czorsztyn was under starosts’ rules (a form of district government). One of them – Jan Baranowski modernized the castle by building a quadrangular entrance tower, designed for use by artillery.
In 1651, the leader of peasants’ revolt in the Podhale region – Kostka Napierski - took control over the castle. He was an emissary of Chmielnicki but also acted as a spy for Sweden. 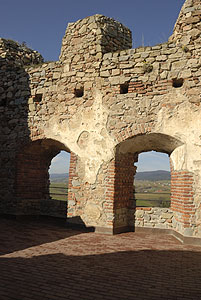 Since the great fire of 1790 the stronghold has remained in ruins. Soon after the fire, the castle was taken over by Austrian authorities until being eventually bought by the Drohojowski family in 1819. They set up a private reserve on Zamkowa hill in Czorsztyn in 1921. In 1970 it became a nature reserve administered by the Pieniny National Park.
Nowadays, this area is called „Nature Reserve – Czorsztyn castle” and since 1996 it has been an integral part of the Pieniny NP (10.28 ha). After the Czorsztyn reservoir was constructed at the foot of the castle, its precincts have altered irrevocably. History shaped the border and crossing on this part of the royal trade route to Hungary, but both have been destroyed for ever. 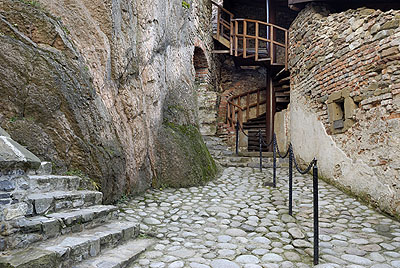 Following the Second World War several attempts at restoring the castle were made, but the ruins have only been open to tourists since the 1990s. This became possible with financial resources allocated for building the Czorsztyn dam in addition to the Park’s own funds.

PIENINY CASTLE
Pieniny castle ruins are located below Zamkowa Mountain (Góra Zamkowa) summit in the Three Crowns massif. The first reliable source of information about the castle dates from the beginning of XIVth century. It says that this castle played an 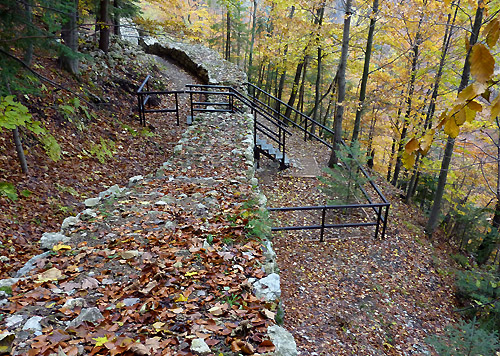 important role as a refuge for Princess Kinga and the St. Clara nuns from Stary Sącz during the third Mongolian aggression in 1287. Results from archaeological research at the end of the 1970s, lent credence to this version of events and consequently scientists associate the building of the castle with Princess Kinga herself. She built the castle in the very centre of the inaccessible Pieniny mountains, probably while she was residing in the convent at the beginning of 1280s. It was intended for use as a refuge (refugium) but the castle presumably stopped playing this role in the XIVth century. In the XVth century, no longer used, it was abandoned.
The castle was constructed from local limestone bonded with mortar. The outer defence wall (known in Polish as “tarczowy” derived from “tarcza”  meaning “shield”), was designed to counter direct attack and was about 90 m long and 120 cm thick,  curving gently and linking two rock edges, thus making the castle inaccessible. The castle used to be an excellent line of resistance as it was surrounded by steep faces. It is believed that the castle didn’t have a main gate. Instead, a small entrance called a “poterne” (just one person wide), was located in the 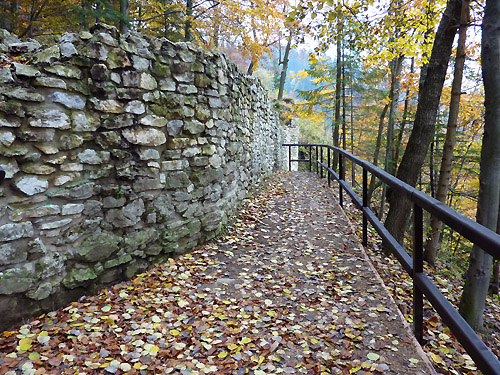 western part of the wall.
Perhaps, there was an additional entrance building or possibly even a quadrangular tower. The only way to get to the tower might have been by using a basket lift pulled up with a winch.  But these are only theories!
Two buildings and a water tank made from well-carved stone blocks adjoin the defence wall. Wooden buildings also probably existed for some time near the wall.
It is complete conjecture that there was another wall at the top of Zamkowa Mountain which allowed defensive cover of all approaches from the higher mountain (Ostry Wierch).
Thanks to the efforts of the Pieniny National Park, the castle ruins were entered in the national register of historic monuments on 18 April 2003.
Currently, the most important priority is to prevent deterioration of the castle walls. Afterwards, it is planned to: exclude Zamkowa Mountain from strict protection and thus to enable remedial work to take place, to set up a cultural reserve called “Pieniny Castle”, to develop an educational path and possibly to make the castle’s layout clearer and carry out further reconstruction.