Home TOURISM Places to visit around the Park

Places to visit around the Park 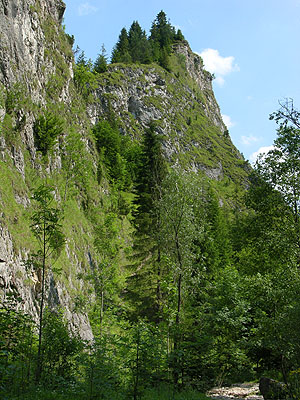 HOMOLE RAVINE RESERVE IN JAWORKI
Established in 1963, this reserve covers an area of 58.6 ha and forms a deep, steep-sided ravine in Małe Pieniny (Small Pieniny). The gorge is regarded as the one of the most beautiful in the Pieniny mountain range.
At the bottom of the ravine, the Kamionka stream flows. In the upper part of the gorge there is very interesting scree dating back to the Pleistocene period. The plant cover is very abundant, amongst the clusters of rock and scree. Rock shelves provide nesting sites for peregrine falcons, kestrels and the eagle owl. The ravine name derives from the Ruthenian words “gomoła”, “homoła”, which means “oval”, “no horned” and refers to the valley shape. The green tourist trail leads the visitor through the ravine from Jaworki to the bottom of Wysoka mountain. 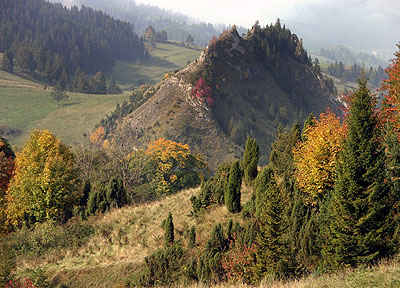 stream in 1963 and covers an area of 33.7 ha. At the Smolegowa Rock relict species – Mountain Avens Dryas octopetala can be found; this species occurs nowhere else in Pieniny. Picturesque rock outcrops create the gorge called “Międzyskały”. Near to the reserve, a remarkable natural rock can be found named "Bazaltowa skała" (“Basalt Rock”), the only one of this kind in Pieniny. White Water reserve is very popular with visitors as it is considered to be one of the most striking tourist attractions in the Pieniny region. The yellow trail leads through the valley from Jaworki to Rozdziela pass.

WYSOKIE SKAŁKI RESERVE
This landscape reserve was established in 1961 and covers an area of 10.9 ha. The reserve is managed with the main aim of protecting the natural coniferous forest (built of Spruce Picea abies) which is the only one to be found at high altitude in the Pieniny. Out of protected species, Turk’s Cap Lily Lilium martagon and Daphne Daphne mezereum can be found here. There are also stands of two, very rare in the Pieniny species: Buttercup Ranunculus platanifolius and Cicerbita alpina.
The reserve is crossed by the blue tourist trail. 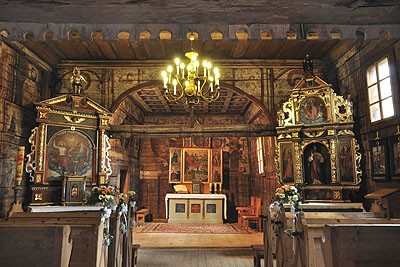 THE OLD WOODEN CHURCH IN GRYWAŁD
St. Martin's church dates back to the second half of the XVth century. In the year 1618 the church was rebuilt. It owes its present form to changes made in 1618. The wooden church is of a framework construction with shingled walls; it has a square steeple, capped with a dome and pyramidal spire.
Inside, fragments of parish polychromic paintings dating back to 1618 have survived, and these cover hidden remnants of paintings dedicated to the church's patron. The high altar contains a magnificent, precious Gothic triptych created at the beginning of the XVI century. This old church is regarded as the one of the most precious Gothic wooden churches in the Małopolska region. 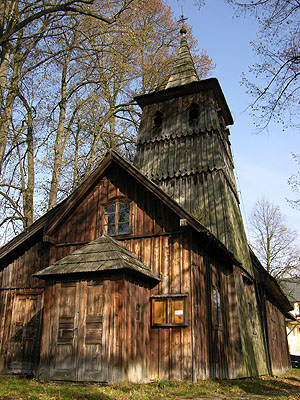 THE OLD CHURCH IN SROMOWCE NIŻNE
A single-aisled building of a framework construction, which dates back to 1513. This church was rebuilt following damage caused by floods in the XVIIth century. A distinctive steeple with spire also dates back to that period. The sacristy as well as the annexe and porch were added to the existing building in about 1894. Most of the old chapel artefacts - like liturgical vessels, the hexagonal wooden font, chalice with pyramidal cover crowned with the Cross and the Gothic triptych showing the Holy Virgin and Infant Jesus figures - were moved to the new church. The figure in the triptych is a copy of a sculpture which dates from XIVth century. The original is kept in the Diocese Museum in Tarnów. The church treasury contains XVIIIth century paintings of St. Antoni Padewski and St. Katarzyna Aleksandryjska. The richly decorated Baroque pulpit is noteworthy.

THE OLD ORTHODOX CHURCH IN JAWORKI
This old Orthodox church was built in 1798. It represents the architecture called “Jozefinska” – based on the Austrian official designs, which define the physical structure and general appearance of the building. The church is built of stone and covered with a shingled roof. The walls and vault are decorated with polychromic paintings. The most valuable relic in the church is a richly decorated collection of icons at the altar, which dates back to the end of XVIIIth century. In the presbytery another precious relic is kept the painting of St. John the Evangelist, painted on the wooden panel with golden background. Attention should also be drawn to the paintings and sculptures which used to be carried during processions and date back to the turn of XVIIIth century. In the sacristy, three very interesting processional Crosses can be admired. 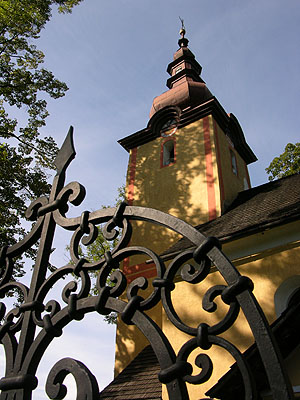 This beautiful church is located at the Dunajec river bank, on the east side of the market square. Its history dates back to the first half of the XIVth century. Only the church's nave has survived from that time, and this is used as a presbytery nowadays. The annexe to the main building is the only remnant of the old presbytery. The present nave was built in 1546. The distinctive steeple, with square base; dates back to the turn of the XVIth and XVIIth centuries. The steeple is covered with a spire that was rebuilt in 1925. After the fire in 1755, a two-bayed, cross-shaped vault was raised on the site of the old presbytery. Among many wall paintings, the most interesting ones are the oldest, dating back to the years 1370-1380, lying on the northern wall of the presbytery. Those paintings refer to the All Saints – patrons of the church. It is worth looking out for precious adornments, e.g. stone font in the shape of a chalice, founded by the King Jan Olbracht and dating to the year 1493; XVIIth century paintings on the wooden panel; paintings presenting the road to Calvary scenes; the main central part of the high altar which dates back to the XVIIIth century and contains figures of St Peter and St Paul. Distinctive sculptures made by local craftsmen can be seen in the immediate vicinity of the chuch.

RED MONASTERY – SLOVAKIA
Founded in 1330 by Kokosz Berzeviczy, it was originally home to Carthusian and then to Cameldolite monks. After the abolition of the monasteries due to the decree of 1782, the Red Monastery was assigned for secular purposes. Nowadays there is an ethnographic exhibition and a restaurant in the monastic buildings. Part of the monastery is open to visitors.
Visiting:
from 1st April to 31st October;  from 9.00 a.m. to 5.00 p.m. (last entrance at 4.30 p.m.);
from 1st November to 31st March; advance booking is required and visits are only available for groups of at least 10 people.

MOUNTAIN HUT ON THE MAJERZ GLADE
The pasture on the Majerz glade (which belongs to the Pieniny National Park) is farmed according to ecological principles. Highlanders (from the Tatras) spend the whole summer season in the flock-master’s hut in the Majerz glade and graze their sheep on pastures. Using the ewes’ milk they make a high quality smoked cheese with a unique flavour following traditional methods. Production technology has been developed by the highlanders over decades and the tradition has been passed on from generation to generation. The unspoilt environment and ecological methods of cheese production assure the high biological quality of the products. The farm is under the control of the certified unit of the Ministry of Agriculture and Country Development and has been granted proper certification.
Open from May to October every year.